3″ patch commemorating motorcycle ride of over 666 miles in a single day.

If you’ve ever had the pleasure of riding over 666 miles  (1071 Km) in a single day, then you know what a pain in the ass this distance can be! This patch is inspired by a mapping result for a ride in September, 2018 from Birmingham, Alabama to Chicago, Illinois.

Semi-Boring Backgrounder
I had ridden to Louisville for the KentuckyKickdown, then spent a few days riding the Tail of the Dragon and wound up at MotoAmerica Race at Barber Motorsports Park. However, that Sunday, I HAD to get home for work, so I mapped out the ride and the map showed the distance to be 666 miles and I thought that was hilarious.

During the duller portions of this ride, I came up with the idea for the patch and after 12 hours in the saddle, I had this concept mocked up –devil with tail forming last digit of 666 and pitchfork.

This is a limited run patch. Once they’re sold, there won’t be any more made!

*unlike other long distance patches, this doesn’t require verification, but you ARE encouraged to list the vehicle, date and end points for the world to see! 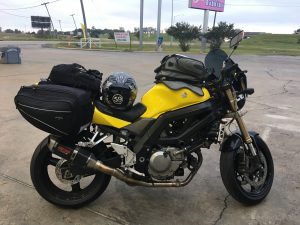